Planning Ahead - No One Expects the Spanish Inquisition!

Most of us remember the series of comedic sketches in Monty Python's Flying Circus satirizing the real-life Spanish Inquisition., "No one expects the Spanish Inquisition!"
But the Inquisition has been serious business in one form or another for nearly 800 years targeting Jews, Moors, witches, the Knights Templar, scientists (like Galileo), theologians and philosopher.

This attempt by the Catholic Church to deal with its enemies, inside and outside, pioneered tools that had not existed before:  surveillance, censorship, and “scientific” interrogation.  These tools spread far beyond the Church to become the tools of secular persecution, tools that have only improved and are part of our lives today. 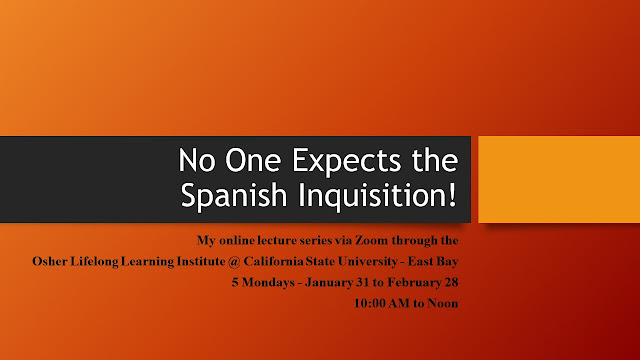 The Pit and the Pendulum by Edgar Allan Poe
The Name of the Rose by Umberto Eco
Against the Inquisition (La Gesta del Marrano) by Marcos Aguinis
Captain from Castille by Samuel Shellabarger
- August 31, 2021