America's Gilded Age (1870-1900) was a time of enormous growth made possible by the nation's vast natural resources and post Civil War industrialization.  The U.S. rapidly expanded its economy into new areas (especially heavy industries like railroads, factories and mining) which attracted 10 million immigrants from Europe - creating a huge demand for food and other resources as the population of towns and cities exploded. 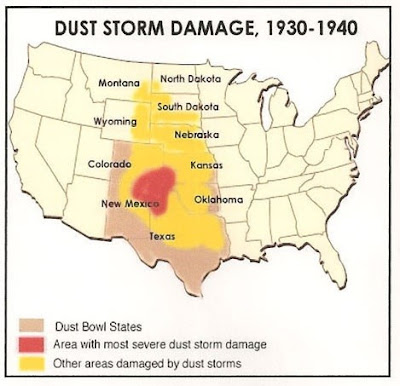 As the 19th century gave way to the 20th and Teddy Roosevelt was preaching conservation from the White House, farmers on America's Great Plains were transforming one of the world's largest ecosystems into the world's most productive farmland.  But as American busness and cities industrialized, so did the farmers in America's mid-section - and the Great Plow-up created the environmental disaster known as the Great American Dust Bowl which gave the 1930s the nickname "The Dirty 30s."

100 million acres of U.S. farmland became useless.  Immense dust storms called "black blizzards" and "black rollers" bured Chicago, halted traffic in New York City, deposited dust on the President's deck in Washington, and even blanketed ships in the mid-Atlantic.  By the mid-1930s, dust pneumonia was rampant.  Doctors found their patients literally stuffed with dirt.  The Red Cross declared a medical crisis in 1935 and opened 6 emergency hospitals in Colorado, Texas and Kansas, some in school gyms that had to be specially sealed to protect patients from incoming dust storms.

Over a million people fled, becoming environmental refugees.  Many headed to California with its promise of good weather and work.  Overall 25% of the population of the area designated as the Dust Bowl abandoned their homes.  Some counties lost as much as 50% of their population.   Approximately 15% of the population of Oklahoma migrated to California - accompanied by many others from neighboring states as well as people from further east seeking relief from the Great Depression. 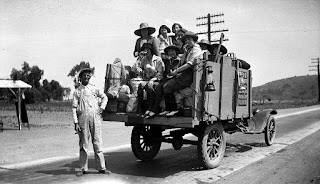 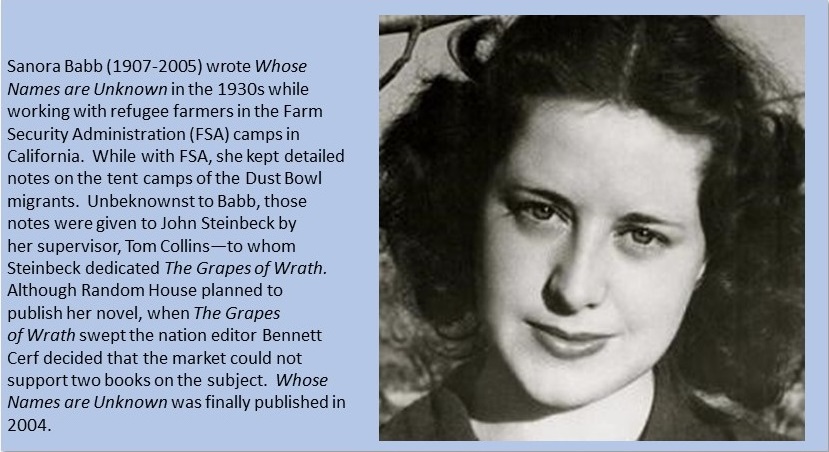