October.  The month when Americans observe Columbus Day.  Or Indigenous Peoples' Day.  Or both.  Or neither.s  There's plenty of controversy over Columbus' legacy and what we should be observing on the second Monday of October—controversy that is not easily contained in either our national mythology or general history courses about European mass immigration to the North American continent which was already peopled by somewhere between 8 million and 115 million.

This month there are two books on the docket:  Mayflower which I’ve finished and The Barbarous Years which I am still in the middle of.

Mayflower:  A Story of Courage, Community, and War (2006) by Nathaniel Philbrick 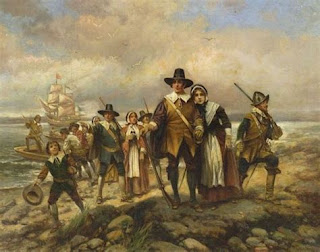 Philbrick tackles the truth behind about the voyage of the Mayflower and the settlement of Plymouth Colony with its challenging first winter for which the settler were utterly unprepared.  After initial attempts between indigenous Wampanoag people and the English to co-exist peacefully, relations collapse, culminating in King Philip’s War (1675–1678) which nearly wiped out both English colonists and Native Americans.  Plymouth Colony lost close to 8% of its adult male population (and a smaller percentage of women and children) and many towns were burnt down and destroyed -  while the Native American population of southern New England was reduced by somewhere between 60% to 80%.  Philbrick’s final chapter section, "Conscience," attempts to examine the conflict from an ethical perspective and grapple with its legacy for United States history.

The Barbarous Years: The Peopling of British North America—The Conflict of Civilizations, 1600-1675 (2013) by Bernard Bailyn

I am still in the middle of The Barbarous Years, and to be honest it is a difficult read.  Bailyn could benefit from a good editor.  As one reader commented:  the auhor definitely does not hold back on naming thousands of settlers across the colonies; it is difficult to slog through all of that.  The book does seem a littler scattershot in its organization and subject matter.
The Barbarous Years is not an easy read.  But I’m learning a lot, and the more-than-occasional awkward sentence structure and tendency to be over-detailed has been worth putting up with so far. Examining Virginia, the Chesapeake area, New York, and New England, Bailyn makes no effort to sugarcoat the Europeans’ experience in America in the 17th century and their relationships with Native Americans.  About halfway through, it has been a less-than-flattering picture of the early leaders and settlers.
- October 24, 2019